I took in some marvelous fog, at the end of the July 4 weekend:

....but I'll save most of it for a while, hoping for a bit more in the next month, kind of a 'summer's end fog wrap up', so to speak/FWIW.

I thought July would be a boring month for skies, but no, it was not.

A few weeks ago, on the 7th, I spotted what i am pretty sure are 'mammatus' clouds, which are usually associated w/ storms/rain. 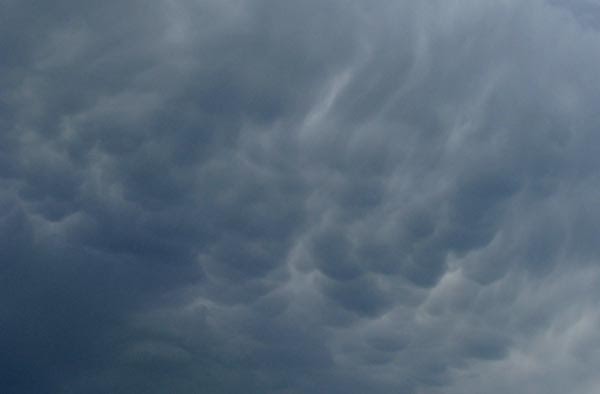 But there was no rain here. 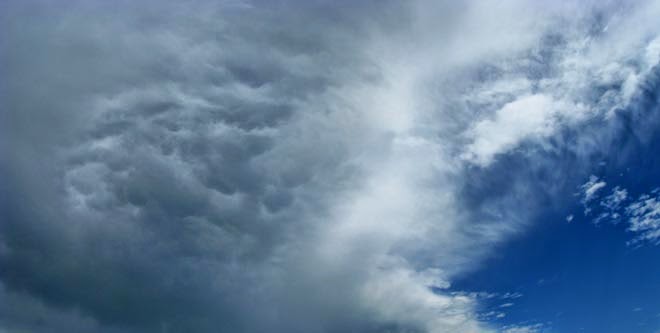 The week leading up to the 21st-22nd there had been a low pressure system hanging out over the ocean, spinning (sucking?) in subtropical moisture ( low pressure systems spin counter clockwise hence the southern/warmer/moister air), which has actually produced some rain. Not much mind you, nothing to quench the drought, but it has brought with it a few mildly interesting skies.
I heard that in SF there was actually a bit of rain. And in Santa Rosa ( north of here, by 20 miles ) there was bit of rain. But just a bit.
Here in San Rafael there was about enough to get the street wet, underneath the canopies of trees? it was dry.
Overnight, things really happened, thunder, lightening & thunderstorms.
Comments I read at the SF Chronicle website seemed to indicate there had not been rain in July, or a storm like this in decades. In the Sierras there can be rain/thunderstorms thanks to the elevation of the mountains, but not here in the lowlands by the coast.
At 7:30AM i heard a growing rumble of thunder, louder and louder, until there was a thunderclap that sounded more like an explosion, it shook the building and my chair, just one big bad pulse. BANG!
The skies were awesome. 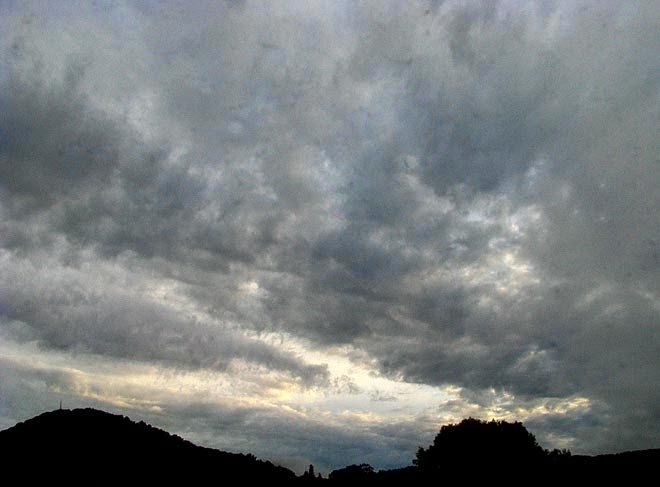 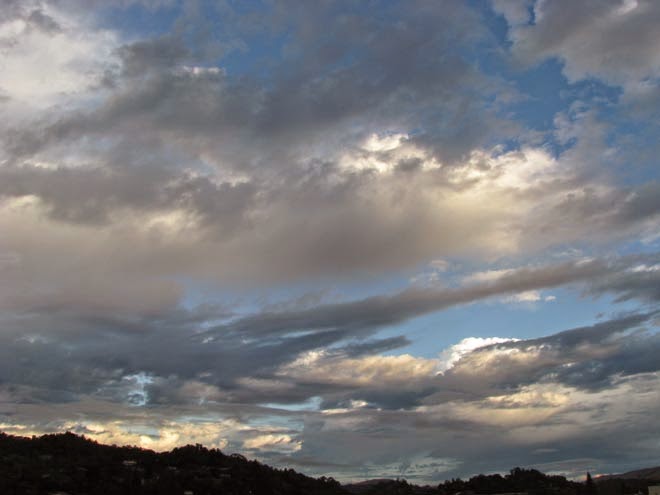 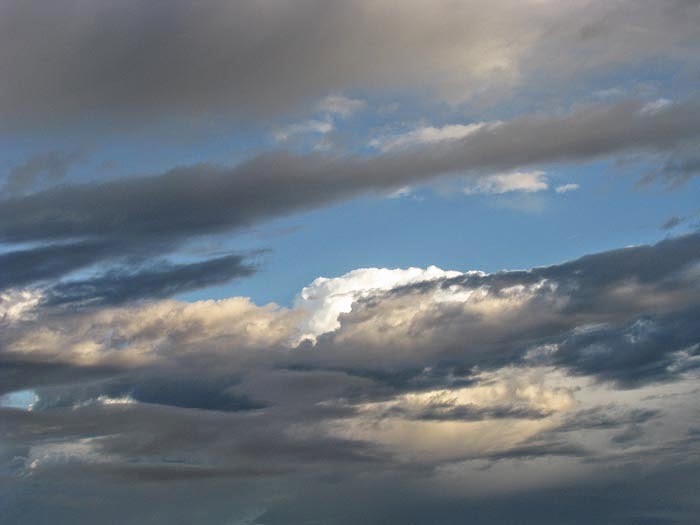 A few hours after this blew thru? You'd never know it had happened. 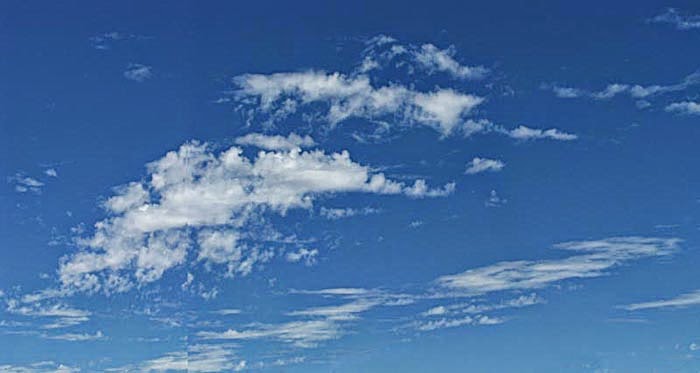 The same upper level low pressure system that created the recent thunderstorm has stuck around and made for partly cloudy days all week. This AM, i was treated to a rather nice sunrise: 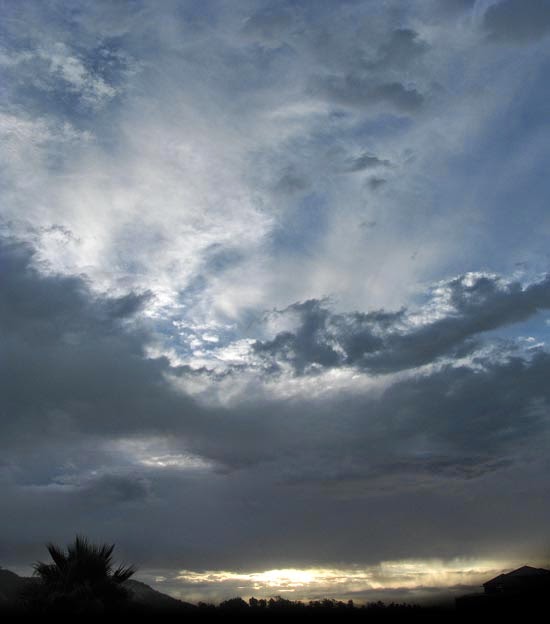 I found some good discussion thanks to the NOAA:
http://forecast.weather.gov/MapClick.php?zoneid=CAZ006


Here's the NOAA talk, a bit technical, but if you can see through that, very interesting:
(even though in ALL CAPS!)

DISCUSSION...AS OF 3:10 AM PDT SUNDAY (7/27)...CHALLENGING FORECAST THIS
MORNING...MAINLY DUE TO SUBTROPICAL MOISTURE STREAMING ACROSS THE
AREA AND THE POTENTIAL FOR CONVECTION.

A STRONG UPPER HIGH REMAINS CENTERED OVER THE SOUTHWESTERN CONUS
WHILE A WEAK UPPER LOW IS LOCATED WELL OFF THE CENTRAL CALIFORNIA
COAST. IN BETWEEN THESE TWO SYSTEMS...SOUTHERLY FLOW IS ADVECTING
MID AND HIGH LEVEL SUBTROPICAL MOISTURE NORTHWARD ACROSS
CALIFORNIA. A WEAK SHORTWAVE TROUGH EMBEDDED IN THE SOUTHERLY FLOW
HAS BEEN TOUCHING OFF SCATTERED THUNDERSTORMS OFF THE CENTRAL CA
COAST OVERNIGHT. KMUX RADAR ALSO SHOWS SCATTERED HIGH-BASED
SHOWERS...MAINLY OVER THE COASTAL WATERS. THERE IS CONSIDERABLE
DRY AIR BENEATH THESE SHOWERS AND SO PROBABLY NO MORE THAN
ISOLATED SPRINKLES ARE REACHING THE GROUND.

-----------------------------
Soooo... how's that drought thing going? Not so good. In fact, it continues, it sucks, and I shower once a week.
This could be a false alarm, or it could be the beginning of something really nasty.
It is said that the Anasazi lived and survived in the SW deserts a thousand or so years ago because it was wetter then, they could grow crops. That changed, and they disappeared. What will become of us?

I did a darkroom montage print many years ago that ends up being about that, though i wasn't quite aware of it at the time. 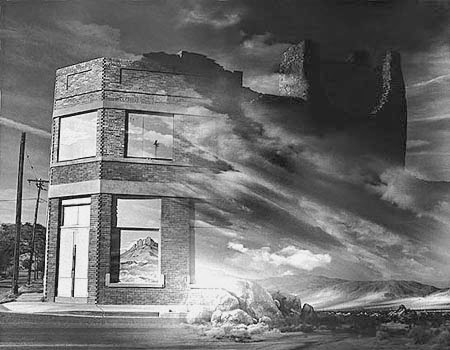 At the right/top, some native american ruins just north of Flagstaff AZ. They blend in to the facade of some deserted buildings in a recently 'lost' desert town, at the left ...
Easy come, easy go?
I dunno.

What do you think?

http://news.yahoo.com/water-levels-nevadas-lake-mead-drop-low-221400840.html
best part of this is the comments section - definitely check it out.